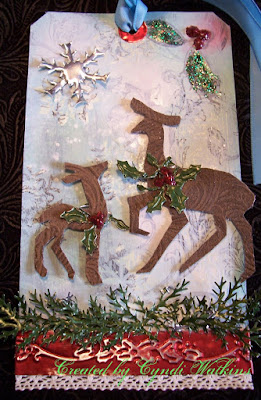 I made so many substitutions today. Tim had a "Seasonal Craft Resist Pad." and I had cardstock on which I made some areas "resisty" by stamping and embossing with clear embossing powder. Tim used "Distress Stain" and I used gesso. I will say that if I were to do my background again, I would do the resist part first before stamping in black, but it all kind of washed out with the gesso, so I guess it's not a big deal.
Tim sponged his holly with color. I started doing that, but felt after it was all put together that it needed more, so I covered it with Stickles. (Something had to balance the bottom border.) Tim used Perfect Pearls Mist, and I used Smooch Spritz.
Big difference--Tim used a deer die, while I had to stamp a pair of deer (Penny Black) on chipboard, cut the deer out, run them through the Xyron to make them sticky, put the fabric on the deer, and then cut the deer to the chipboard shape. That took a while. Instead of canvas, I have this fabric that looks just like tooled leather, and I'm totally in love with it, so I used that on the deer. (I also have that fabric in black, which you might be able to see behind the tag in the photo. The bottom trim on my tag is a little different as well. I used metal by Ten Second Studios for the red and also the green pine boughs (see yesterday's post for details on that).
The garlands around the deers' necks are made of the Ten Second Studio metal as well. I cut out this die from Cheery Lynn Designs out of the metal, clipped it up, and made my own wreath. Then I added Stickles.
I'm so glad tomorrow is Saturday and I don't have to get up at 5 a.m. to make the tag. Yay!
Cyndi
Posted by Cyndi Watkins at 8:48 AM

it is adorable! Great job!!!

Ah ha! I thought I recognized that fabric - it looks so good! Love to see more of those metal bits too. Very nice tag!

Beautiful take on Tim's Tag #2 -- I like how you made the deer your own. TFS
Cheers, Karen
alteredscrapbooking.blogspot.com