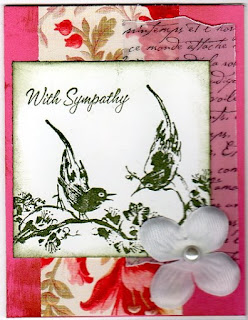 Well, now that I have a giant card rack up at church all the time, I am feeling the pressure to actually put cards in it.

So this morning I got up an hour early so that I would be able to make a few sympathy cards before work. I didn't know exactly what I wanted to do, but it was going to have to be quick and easy. Unlike some people, I try to be on time for work.

I know, I know. Can you believe they fired me the other day for coming in late?

Yes, Shelby, I can. You were almost two hours late. Waitresses cannot show up for the lunch rush at almost 1 p.m. But back to my story . . .

I sat down to peruse my latest Catch-Up issue of the Stampers Sampler . . .

The one you keep in the bathroom?

That's the one. I found the perfect card to CASE. It's on page 108 if anyone has her copy close by. I studied it really close, read the description to make sure it didn't have a tricky technique that would take me more than an hour to replicate. Then I happened to look at who the artist was who made it. The card was made by Shelly Hickox!!!

Your friend who lives in the country and doesn't throw anything away?

If I could make art out of refuse, I wouldn't throw anything away either. Anyhow, I just thought it was cool that out of a magazine full of stamped cards from the US and abroad, I would pick out my friend's card to CASE. Anyway the birds are by Penny Black, the words (both English and French) are by Stampin' Up!

I stamped the coordinating envelopes so she wouldn't be late.

Cyndi and Shelby
Posted by Cyndi Watkins at 2:52 PM

Oh Shelby, I throw lots of things away!

It is so crazy that you picked my card. I love your interpretation of it! That bird stamp is awesome.

well at least you pick a great artist to copy:D btw love the card or you sure that we want see this again..sounds fishy too me!