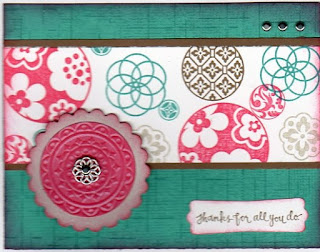 That's so strange. I just found this card by the computer, which was apparently going to be uploaded today, but I guess Cyndi didn't have time to scan it this morning. The weird thing about this card is that the embossed medallion isn't really embossed. I know this for a fact, because I touched it and was surprised that it is as smooth and flat as Oklahoma. Click on the picture so you can see it real good. You won't believe it!

Shelby, what are you doing with (1) my card and (2) my computer? And when did you start uploading stuff on your own?

Well, you're at work, so I assumed you weren't going to get this done today. I was just being helpful. I have to leave for work in a few minutes, so why don't you quickly tell us all how come that center medallion looks embossed, but it's not.

I guess you're talking about the red part and not the silver brad and it's cute filigree enhancement.

Let me start by telling you that this card was made for yesterday's Splitcoaststampers challenge where everyone was invited to scope out Christy S's gallery, pick a card we liked and change a few things. I picked out this card, which is fabulous, and since I just received the Stampin' Up! Circle Circus stamps, I CASED it.

The medallion is made using a technique called Faux Dry Embossing. First I stamped the image in white craft (pigment) ink, and then, using my Stamp-a-ma-jig, I moved the image over just slightly and stamped it in Rose Red, the same color as the cardstock. Actually, I discovered that it works better when I stamped it twice in Rose Red, holding the Stamp-a-ma-jig in the same place both times. It covered the white better.

Thanks for the explanation. I'm late for work now. I just took a new job as a waitress, and I'm pulling a lunch shift today.

i think i will take my stamp a ma jig out of the cabinet and put it on my table so that i might use it..you have inspired me:D

I really, really need to try this technique. This is one of the best cards I've seen! You need to demo it for me. I'm still not sure what kind of stamps I should use.