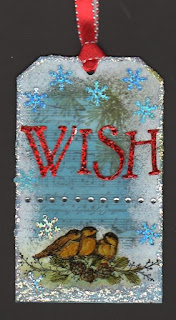 I'm still working on Tim Holtz' Christmas tag challenge and having a ball. Here is the link to his Tag No. 6. It's different than his other tags--old fashioned and sweet. Here's how I did it.

While I was waiting for the alcohol ink to dry in the pallet, I made the background. First I did it like Tim suggested, but I thought it was too light for my taste, so I put two colors of blue reinkers on the craft sheet and spritzed it. There was a LOT of ink and water on the craft sheet so I switched my cardstock tag to a piece of watercolor paper. Inky water still dripped off the tag when I picked it up, but the blues combined and swired so beautifully. The background was fabulous when I took the heat gun to it.

If you are examining the tag to find the beautifully swirled background, I am sorry to tell you that something terrible happened to it. I stamped the green branches (still looking good) then stamped the sheet music. Whoops! I accidently stamped the music upside down. If only I hadn't already cut the corners at the top I would have just flipped the tag over, but no, the tag had been trimmed. So I used my soft filter technique and lightened the whole thing. Then it was too light, so I added dark blue to contrast with the "snow" that was going to be on the outside of the tag. It worked well as a camaflage, but my beautiful background is now no where to be found on the tag.

On a piece of acetate, I stamped the Christmasy branch and the little birds from Stampin' Up!'s retired Feathered Hope set. I also found out the reason Tim suggested outlining the tag shape onto the acetate. Acetate is very hard to see on a work station (especially a cluttered one). I had to outline it, just to see where I was supposed to stamp! Then I turned the acetate over and colored the little birds with the dried reinkers activated by a water brush full of blending solution. After that I added white paint as directed by Tim, but I added it with a sponge, which I thought gave kind of a frosty look to it.

The letters were cut out of a glitter sheet and colored with alcohol inks. I punched snowflakes out of a Diet Pepsi can, just like my friend Shelly did, but they were too big. I was afraid for my petit birds to get hit with such large flakes. I remembered I had these cute little snowflakes left over from two Christmases ago, so I used those. Sorry, Shelly. I broke with the program.

When I was done, I noticed there was a lack of Stickles, so I remedied that by putting Stickles glitter glue around the whole tag, giving it a very icy feel.

Posted by Cyndi Watkins at 9:02 AM

Hi! This is cool that you are doing al the tags. I looked at his site and can't believe the detail of his instructions! I hope you win something! Happy stamping...

This came out so perfect! Much better than T!m. Don't tell anyone I said that. I think you were smart to scale down the snowflakes. They would have pulverized those adorable birds.

love the snowy feeling..great take on the tag