Pop-It-Ups Challenge: Stretch it Out

Wow! It has been forever since I posted anything on my blog. Shame on me!

Luckily I was inspired by a recent challenge on Karen Burniston's blog to "stretch it out." Karen Burniston is the designer of the Pop It Ups die line from Elizabeth Crafts.  Recently some friends of mine and I got together to create some accordian cards using napkins as a background. Those accordian cards were so much fun to make, and it turns out that napkins make gorgeous background paper with a very cool texture, similar to fabric. 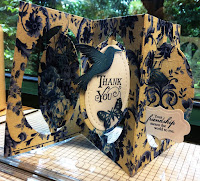 I should do a separate post on these sometime. As you can imagine, this accordian-type format for a card makes an amazing display on any friend's fireplace mantle or entry hall table. (I like to imagine my friends putting cards I send them in places of distinction.)

Back to the card I just made, however, it was inspired by this blog post by Karen Burniston to make an accordian card, along with a tutorial for a STAGGERED accordian card. Here is my version. 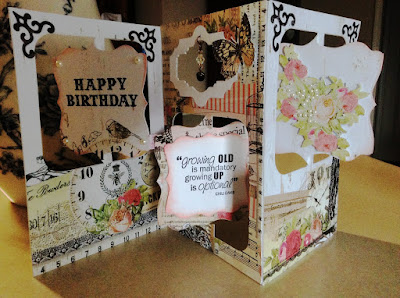 I chose a pad of paper from Prima Designs that I have been hoarding forever called "Lyric." It's so pretty and feminine. 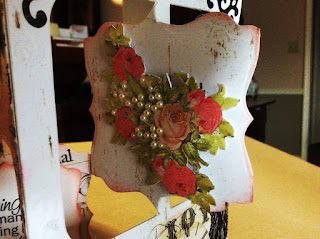 It's my new goal to do more fussy cutting. I know that is very counter-culter in the papercrafting industry right now with all the cool dies that go with the cool stamps, but fussy cutting produces great results, especially if you are cutting patterned paper. So I fussy cut the roses you see above, painted the roses themselves with Wink of Stella (ultra-fine glitter in a tube applied with a brush), and put a half-pearl sticker over each and every baby's breath blossom. I wish you could see the shimmer of the Wink of Stella. Trust me that it's lovely in real life. In fact, every rose on the entire card is painted with Wink of Stella. 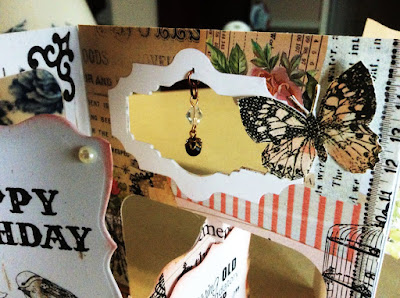 For the window, I branched out from Pop It Ups dies and used a Sizzix die for the window and a Cheery Lynn die for the outside of the frame. I was delighted at how these two dies worked together.  I dug through my stash and found a bead with another bead on it, and thought it was a good complement to the Lyric paper. The butterfly is also painted with Wink of Stella.

Confession: I added this window to the card kind of late in the game. In fact, I had already attached all three panels to each other. And then when I die cut it . . . it was not centered as well as I had hoped. The butterfly was added to trick your eye into thinking that this was a well-constructed card. 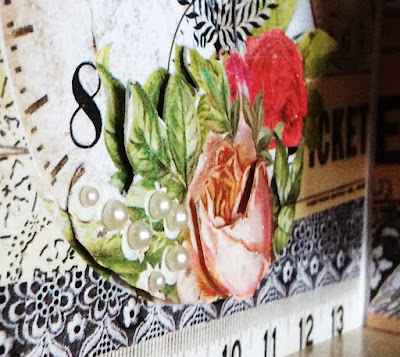 Look at that! I not only fussy cut, but I used a "paper tole" technique, which is a fancy way of saying I made several layers and put pop dots between them. I even curved the rose petals a little. 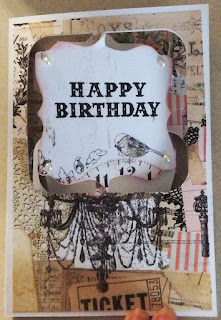 Although these accordian cards are all about being "open," you have to put a front on the closed version so the recipient of the card is not bewildered when she takes it out of the envelope.

I hope you liked my card, and if you have a chance, check out Karen's tutorial.

I love this card!! And of course I have one if your accordion napkin cards in a place of distinction. :-)
Excited to see you blogging again!