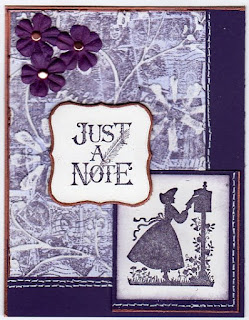 My stamp club, River City Stampers, is having a "Demo Day" tomorrow where various die-cutting and embossing-with-die-cutter techniques will be taught. I am actually teaching one of the embossing techniques, but not this one.

This is one I came up with just because I have Cuttlebug on the brain.

Now before everyone leaves comments telling me that this is already a technique that some famous stamping goddess has published and is already all the rage in some stamping circles, I must say that I am quite sure I am not the only person to stumble across this.

Oh, stop being so diplomatic and just get on with it, Cyndi.

Good morning, Shelby! I didn't even know you were awake yet.

Oh yeah. The cool background piece was made like this: I started with plain old white cardstock and brayered some ink onto it--something purple but lighter than Eggplant. Then I stamped a postage stamp background from River City Rubber Works in Elegant Eggplant ink. Then I ran it through the Big Shot in a Cuttlebug embossing folder. Then (and this is the cool part) I sanded the raised parts, leaving the Cuttlebug design white and really, really soft. In fact it feels JUST LIKE FLOCKING!

I am normally not too impressed with this stuff, but I have to admit the texture on this background is very nice. Wouldn't it be easier, however, to just use pre-printed background paper?

Maybe, but this way I got exactly the color I wanted to use, and I'm not sure the thinner paper would end up being so soft. But maybe it would. Why don't you try that today while I'm at work?

Corky and I are rehearsing and meeting a guy for lunch.

I forgot to alert our readers about this new development. As you may know, Corky and Shelby's band broke up some time ago because . . . well, because the band was not very good.

But they have found a new genre. Jazz. It actually sounds way better than the rock cover band ever did. So far it's just Shelby on vocals and Corky on bass.

We're having lunch with a possible percussionist today.

You're adding drums? Won't that be a little overpowering?

Just someone to play a maraca or cymbal--something light and jazzy. And also someone who knows how to speak jazz so he can interpret for us. The only jazz-speak we know is from an old Andy Griffith episode.

Posted by Cyndi Watkins at 8:54 AM

great technique and yes the softness of the paper is really neat and feels like flocking..so jazz is our new music of choice..you must let us know when they will be playing..