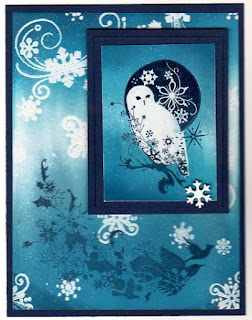 Yesterday on Splitcoaststampers.com the color challenge was . . . any color you like -- as long as your card was monochromatic. As luck would have it, I just received Inkadinkado's Winter Birds from Jacksonbelle Embellishments, saw the image of the owl, and knew immediately that blue was going to be my color of the day

So after I had finished the evening's de-cluttering project (yes, there's more to go, but one must have art in one's life), I commenced with the stamping.

Starting with the small panel, I stamped the owl image with Night of Navy ink on glossy cardstock, set the ink with a heat gun, then colored in both the owl and the blue circle behind his head with a VersaMarker and embossed with clear embossing powder. Next I took my trusty rubber brayer, loaded it with the ink from a Baja Breeze ink pad and brayered the top and the bottom until there was just paleness in the middle. (The intent was to leave more white, but the brayering got away from me.) I used Pacific Point and again brayered the top and the bottom leaving even more in the middle. Finally I added some Night of Navy ink just to the top and the lower left-hand corner. Then I wiped the ink off the previously embossed owl and . . . wow! It looked so good except for the lower right-hand corner which somehow had a dot of white that the ink wouldn't stick to. No problem. That's why God gave us snowflake brads.

For the background piece, I stamped the "birds leaving a trail of Christmas cheer behind them" (hereafter known as "BLTCCBT") stamp in Night of Navy. Then I stamped the snowflakes from another clear stamp set (I think it's Inkadinkado, but I won't swear to it) using only VersaMark, and embossed them with the clear embossing powder. I used my brayer in the same way noted above and wiped the ink away from the flakes. Cool!

I originally matted the little owl with one navy piece 1/8 inch wider on all sides that my owl image. But while waiting for Bob to get off the computer last night so I could scan the card, I looked at it from across the room and I realized the owl should have a thicker mat. So I double matted with the same cardstock. I kind of like the double-mat look.

Special thanks go out to Michelle Zindorf for her work in raising the stamping bar, and then giving us all step-by-step instructions so we can use the "Zindorf Technique" as well. If you don't stalk her blog, you are missing something.
Posted by Cyndi Watkins at 9:06 AM

Wow, this is breathtaking....seriously. I love the stamps you used, the technique, and the color. Just beautiful!

the blues are great..you sure have started off blogging with a bang..please keep sharing..

now isn't that just the most beautiful.

WOW! Your cards are just beautiful!