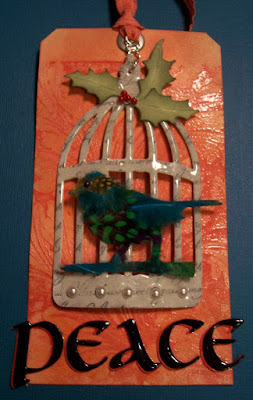 I will say that when I spent the day envisioning this tag before I made it, the background was a bright two-tone. But when it came time to put it together, I couldn't have anything compete with my bird, so I went monochromatic. This tag is all about that bird. I love him so much I might actually cry. (But since it's 1:30 in the morning, it could be exhaustion.) Here's a close-up of the little fellow: 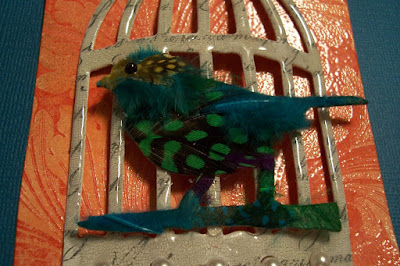 I Xyroned a bunch of feathers onto a piece of chipboard, and then I die cut it and hoped for the best. I won't lie to you--I added the yellow feather to his head after it was die cut, and of course the beady eye, but other than that the feathers were randomly placed, although they were all facing the same direction on the chipboard.
This close-up also shows the bird cage. I used Shelly Hickox' "faux crazed porcelain" technique. You should check it out if you haven't already.
Cyndi
Posted by Cyndi Watkins at 1:13 AM

That is insane! You are the most creative person I know. Love your bird! You should crash the party today and come hang out. For realz!