Okay, so Shelby and I have started investing all our hard-earned money in Copic markers, and the issue of storage has come up. Since we like to take our Copics with us sometimes, we wanted our storage to be portable as well. Our need became painfully apparent last Friday night, didn't it, Shelby?

I believe I was doing you a favor by carrying them at all. And I thought we weren't going to talk about this. Focus on the project!

Back a few months ago when we only had 72 Copics, it was easy . . . keep them in the box they came in. But then Shelby got her income tax refund . . .
WoooHooooo!
. . . and bought us some more Copics. So I started looking at other people's websites for how they were storing their markers, and I really liked how Cheryl Horton was keeping hers. But I didn't have a caddy like hers, and I really like keeping them organized in the Copic boxes. So I bought an extra Copic storage box, took some chipboard, and made my own Copic caddy. 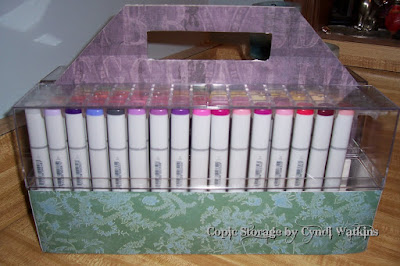 You're probably going to want to give them more detail on this, Cyndi.
Okay, Shelby, here goes (I wish I had taken photos while I was making it, but I didn't so try and visualize). I took some chipboard and cut strips to 12" X 2-7/8". These were used as spacers between the bottoms of the two Copic boxes (use as many as you need to make sure the boxes sit flat together and the tops can be put back on comfortably). I made sure everything was taped very securely with clear packing tape.
The I took a piece of chipboard and cut it to 12" wide X 9" high. I marked 3" from each end of the 12" top edge AND I marked 3" down from each of the top corners. I used these marks, a ruler, and my craft knife to remove the triangle from each side of the chipboard, thus giving me a good shape for the handle of the caddy. 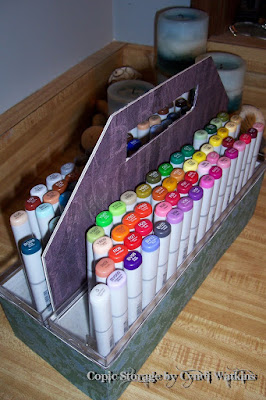 Then she cut a rectangle for the finger hole.
After I covered the chipboard with paper, I taped the chipboard handle to one of the boxes very securely with packing tape, then I taped the other box to the first box so that the handle was in the middle. Then I put packing tape on the bottom so that the boxes are taped together very well. Then I covered the bottom of the Copic boxes with scrapbook paper to make it look like one box.
Then I put all the markers in, by number, according to each color family!
And we still have room for more markers!
So Friday I was at my church's stamping/scrapbooking event, and Shelby had put all the markers in an envelope box.
Where they fit quite nicely, but you couldn't pick out just the right colors conveniently.
I dig through the box to get just the right marker from the bottom, and I notice there's something on the markers! Do you want to tell the nice people what was on our Copic markers?
Butter.
Shelby had not only put stamping supplies in her bag, but a loaf of cinnamon bread to share with everyone and a stick of butter . . . and left it in the car all day.
You didn't see most of the mess the butter left in the bag. It was disgusting. I do feel really bad about that. I'll buy you some more Copics to make up for it.
You're on!
Until next time,
Cyndi and Shelby
Posted by Cyndi Watkins at 12:22 PM

How heavy is that thing anyway? I don't know if I could lift it!

Hahahaha! You're funny, Shelly. It's actually not very heavy because the plastic storage boxes don't weigh much at all.

You guys are just a tad crazy ya know - but thats a good thing. I had found a bag at Micheals that holds 4 boxes and then has a center pocket I keep my pencils in and some side pockets I use for my spicas.....but it is kinda wide and I had recently wanted to fly and take my markers but it was an open bag.....I have a couple old samsonite make-up/overnight hard sides that I have been meaning to cover - if I ever get one recovered I will play around and see if I can make dividers an try that out as a marker storage.....
Thanks for stopping by.