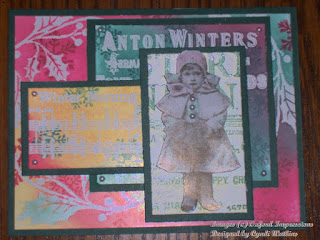 So while many of you were out partying last night, I was home making this card from my new Oxford Impressions plate "Winter Snow". The backgrounds were made with the Faux Designer Paper technique from the Technique Junkies Newsletter. The little girl was stamped in black, but then lightly colored with chalks using a Q-tip.

Because of the glossiness of the paper and my camera's flash, the image of the girl didn't turn out as clear as I would like, but the girl is popped up on foam dots, and when I tried to scan the image (instead of photographing it), my backgrounds were blurry.

Although it is past noon, Shelby is not awake yet, but I did want to share some sad news about her. Her band was playing last night at a party, and Kelly, the wife of guitar player Chris, was there. It was the first time Kelly had heard the band play, and she told Chris that if he was going to be away from his family, staying out until all hours practicing with his band, he had to find a better band to play with.

This suited Kevin the drummer because he had also been getting a lot of static from his partner Ron.

So now Shelby and Corky are at loose ends band-wise. Perhaps they should find jobs or something.

boy what a bad year to have to find really jobs:D..great card like the faux paper..mmmm i might just have to try that technique this year..