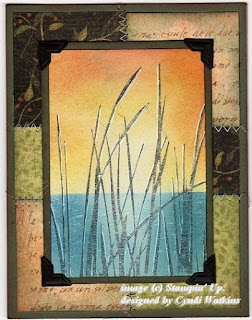 Y'all are not going to believe this, but Shelby actually played an integral part in making this card! She did all the sewing on the background.
Cyndi could have done the sewing herself, but apparently she doesn't know how to thread her machine.
It's true. I was cursing the stupid sewing machine, when my older sister came to my rescue, threaded my machine properly, and then, while I worked on the foreground, she sewed the scraps of paper (which had their edges already sponged with Always Artichoke ink) to the base of the card front.

I'm your younger sister by 18 months.

As if. So anyway, the main image (a la Zindorf) was created as follows: I took a Post-It note and masked off the top two thirds, then sponged Not Quite Navy ink on the bottom third starting with the outside edges and working my way to the inside, getting lighter and lighter as I went toward the center. Then I used the same Post-It and masked the water. I sponged Summer Sun, More Mustard, and Pumpkin Pie inks, getting very light toward the center so it would look sunsetty.

Very imaginative word there, Sis. And who named these colors? Allie Alliteration?

Then I stamped the grass from Stampin' Up!'s "Inspired by Nature" set and highlighted the grass with a white gel pen. I also used the pen to add a little light to the water. Finally I added photo corners to the matted image to give it more of photo feel. What do you think?
I think you've wasted enough time on this card, and it's time you got some housework done. I'm not cleaning this house by myself again. Your readers would not be impressed if I photographed and posted the living room.
Unfortunately, she's right. We're off to do a few chores. Thanks for reading.

Posted by Cyndi Watkins at 4:23 PM

Omg this is so so stunning...I just love the colors and the image and the background wow Oh wow I love it I love...

must i am diggin the sister combo on the blogging..can't wait to meet the other half of the team