Is it just me? I buy cool things because I think it will make a cool art project, and then that cool thing just sits on a shelf and takes up space. This is a wood shelf that I bought at the dollar store over a year ago. I bought it not having a clue what I was going to do with it, but it had great "bones."

Yesterday it snowed and I stayed home from work. Time to make that wood shelf into art. 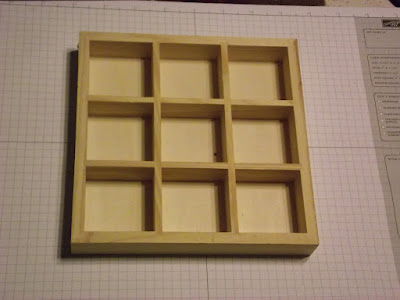 So I painted the shelf with my favorite acrylic paint--DecoArt Dazzling Metallics, Ellegant Finish, Espresso. It's basically brown with a nice shimmer. Then I lined the back of the shelf with some paper from GCD Studios. 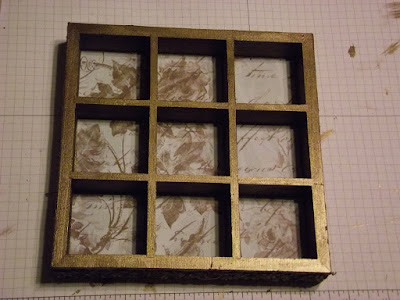 I wanted the edges of the shelf to be really special, so I cut 1-inch wide strips out of some aluminum I had lying around (I guess at one time I thought it would make a cool art project), and used a Ten Seconds Studios kabuka mold in my Big Shot to emboss a really pretty design into the aluminum.

Because I wanted it to match the rest of the shelf perfectly, I painted the aluminum with the same DecoArt paint, and when it had dried, I sanded the top so that the silver would show through on the design. TIP: There is no need to paint the metal before you adhere it to the shelf. I had to repaint it after I had adhered it to the shelf with Humungo Killer Tape, due to the fact that I really burnished the metal onto the shelf. The process of burnishing also scrapes off tape. Lesson learned. 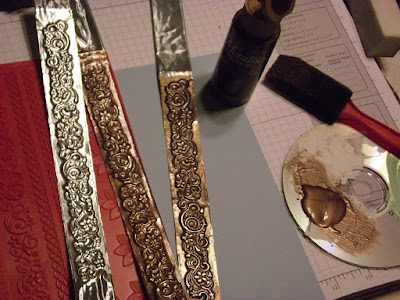 Anyway, in the end the edges turned out really good for a Snow Day Art Project! 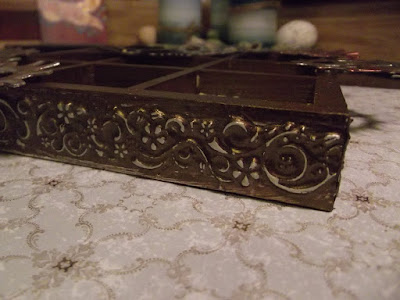 The gears were cut out of some chipboard using a Sizzix Bigz die from the Tim Holtz Alterations collection. I wanted to try the Faux Tarnished Metal technique that my friend Shelly Hickox was kind enough to write a tutorial for. The only problem was that I appear to be out of clear UTEE. However, I have lots of bronze UTEE, so I used that. Somehow one of my gears even got pitted. Happy accident. That's distressing, baby. 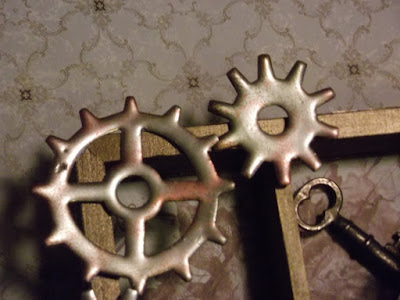 So the gears might clue you in that I had a Steampunk theme in mind. My aforementioned friend Shelly recently did a tag of a Steampunk woman that was very cool, and I was going to do the same, BUT as I was looking at my stamp images, this kitty cat from Magenta caught my eye. I put a top hat on him from Oxford Impressions. Unfortunately, the hat was going the wrong way, so I stamped it with StazOn onto acetate and flipped it over.
And where did the feather in the hat come from? Well, you never know with a cat. Better to not ask questions.
And did you notice the monocle? If I were to do it again, I'd make it a little bigger, but I though it was a cute Steampunky touch. I bent some wire, set it over the cat's eye, and then filled the center with Crystal Effects glue. 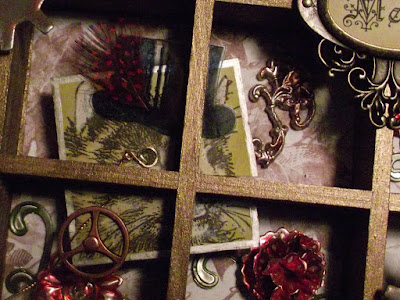 I know that pieces of Art nowadays are supposed to say "Dream," "Create," or even "Hope." But I though "Meow" was much more appropriate. I printed it using a font called "Kelly" and put it in a Tim Holtz' Ornate Plate. 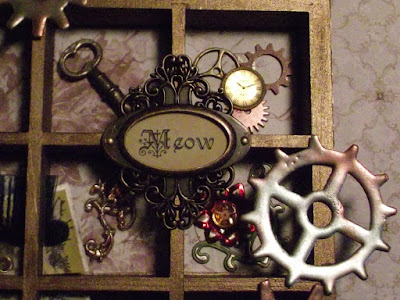 I wanted some more color, so I made some flowers out of Ten Seconds Studio art metal and these and these Spellbinders dies. 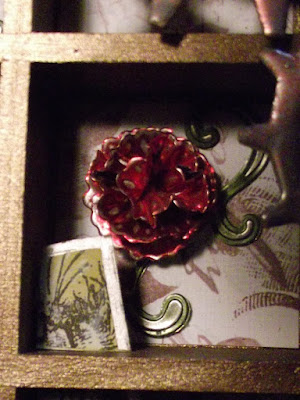 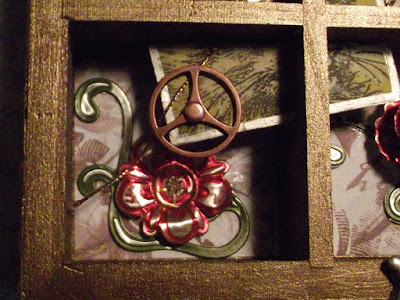 So here's my finished Snow Day Art Project piece. What do you think? 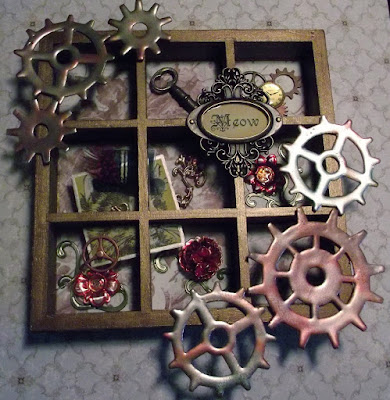 This is so COOL! I want to go the the dollar store right now. I love all the metal stuff you did - especially the edge trim and the red flower. Gorgeous!!

I think you need more snow days - this is great! I love the way you put the TSM on your work - it adds so much. I need a class on the flowers, please.

What a fun project. I love how you pulled it all together. That is one cool cat. LOL. Wonderful flowers and your gears are perfect.

This is awesome! I bought a Tim Holtz Configuration Box and haven't started it yet! You did a great job on this. Love the details!