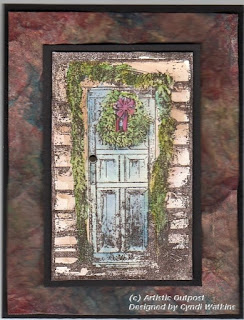 Check out the cool background on this card. It's called Renaissance Paper and we made it at my stamp club this past Saturday. We took large pieces of paper bag, soaked them in water and white vinegar, and then sponged with acrylic paint, including metallic acrylic paint. It looks so cool in person.
No, it looks bumpy in person. As I'm looking at this card the wadded-up-paper-bag part isn't lying flat at all. Couldn't you have glued it down better?
Shelby's right in that it is not lying flat. But what Shelby doesn't realize is that parts of the background are glued flat to the black base and other parts are held aloft by Pop Dots--the big Pop Dots. I wanted it to look kind of like a sculpture.
Oh, I see it now. It's kind of like a door stuck on a rock.
The door image is by Artistic Outpost and is one of the images on the Snowy Woods plate. I watercolored it on watercolor paper using reinkers and a water brush. The door knob is a brad.
Since Cyndi's last post, which was a week ago (we're not very industrious, are we?), I have been getting a lot of flack from my friends about Corky and the dog and the tire swing. Well, I just want to set the record straight that (1) his living in an RV in my sister's backyard is not a permanent arrangement; (2) the dog is well behaved; and (3) the tire swing is a blast. Shelby and Corky raked all our leaves into a big pile and jump into them from the tire swing. I have no idea why they don't break their necks. Corky found an old mattress on the side of the interstate and we put that under the leaves. We're not stupid. There's an old mattress from the interstate in my back yard!!!??? Ewwww! Until next time,
Cyndi and Shelby
Posted by Cyndi Watkins at 9:43 PM

This is really pretty! I love the brad for the door knob. I was wondering if anyone used their paper. Yours came out great.

She also attached a photo of the card to the ROTR Yahoo Group, but I think people are interested in other things over there right now.

great card..the background paper looks good..glad you use it and made it look so good..